Reconnecting With The World

When Sister Jo  and I began our sojourn, we wanted to see as much of the U.S. as possible. Horrendous weather kept us from stopping for any real exploratory time between Montana and Arizona.

Once into Arizona, the difficulty became finding a campground that was for tents as well as RVs. We were disturbed to learn that, at least in that state, many such campgrounds that accepted and catered to tenting had been closed down due to financial reasons. The few that still accepted tents, had facilities that reptiles would find unacceptable--and charged exorbitant fees for the privilege of a stay. 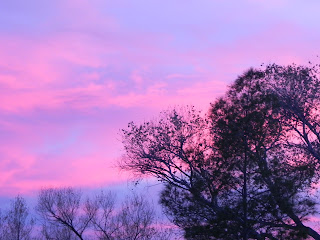 Finally, we found a small state park on the Arizona-New Mexico border which did have acceptable facilities where we could tent in safety and have regular showers, with water available directly across from the tent site. We at least had electricity available at the showers so that we could, if necessary, plug in the laptop and find the online world.

I know that some of you will ask, "Didn't you know that there was a problem with finding tent sites before you left?"

Well, to be honest, no, we didn't. Those closings had occurred during November, after we'd finished our research and had mapped out a feasible route along the southern tier states. Fee schedules had also risen exponentially in those campgrounds left open. Both occurrences led to tightened budget belts.

Contingency plan B went into effect.

Never travel without at least two contingency plans. They're vital to success. We've been blessed during this trip. We have so many friends and family cheering us on, giving us their support and love. That's a big factor in success of any kind.

We chose to hold up with a cousin for several days to get some writing done without worrying about having to break camp every couple of days to find electricity and wi-fi. Although, I have to say that Texas is one of the most wonderful computer-friendly places we've ever seen. Every campground here and state highway rest area is equipped with free wi-fi for the traveler's use.

How marvelous is that?

That's how we stand right now. Visiting, writing, submitting, querying, etc. A writer must sell material in order to feel vindicated. I'm feeling the need for some validation.

For now, I'll sign off and get back to writinig for submission.

Take care, all, and God bless.